(We took the liberty of taking this from Wikipedia.  This is for informational purposes only)

There are many different flange standards to be found worldwide. To allow easy functionality and inter-changeability, these are designed to have standardised dimensions. Common world standards include ASA/ANSI/ASME (USA), PN/DIN (European), BS10 (British/Australian), and JIS/KS (Japanese/Korean).

The flange faces are also made to standardized dimensions and are typically “flat face”, “raised face”, “tongue and groove“, or “ring joint” styles, although other obscure styles are possible. 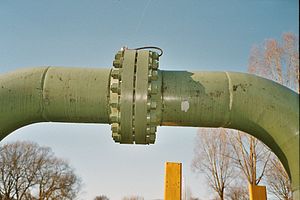 The gasket type and bolt type are generally specified by the standard(s); however, sometimes the standards refer to the ASME Boiler and Pressure Vessel Code (B&PVC) for details (see ASME Code Section VIII Division 1 – Appendix 2). These flanges are recognized by ASME Pipe Codes such as ASME B31.1 Power Piping, and ASME B31.3 Process Piping.